Great news for Disney fans: Spotify just announced that it is teaming up with the movie studio powerhouse to create a brand-new Disney hub. The new hub will be a place where Spotify users can find all the songs from their favorite Disney movies. The new hub will include Disney songs as well as music and soundtracks from Pixar, Marvel and Star Wars movies. Yes, that means all the John Williams instrumentals will be there, too.

The Spotify blog post announcing the new Disney hub said, “Starting July 17, users… can search “Disney” on Spotify to find a designated hub for the music behind some of their favorite Disney movies and TV shows. Stream playlists full of everything from The Little Mermaid to modern favorites like Frozen.” The service will also include playlists curated for all times of the day and many different activities. No matter if you’re in the shower, on the road, or trying to get some sleep you can now find a Disney playlist on Spotify for your exact situation.

The move seems to make Spotify a much more family-oriented platform and could see a spate of family-based subscriptions taken out over the summer. A premium membership costs $9.99 in the U.S., but a family membership, which gives up to six people access to Spotify’s premium features costs $14.99.

One of Spotify’s best features is its Discover Weekly feature, which serves up recommended songs based on what you’ve been listening to. This means the new Disney hub could put pressure on mom and dad to get the kids a profile of their own if they don’t want songs from “The Little Mermaid” skewing their personal algorithm.

Everybody has a favorite Disney song!

Spotify’s new Disney hub is now available to users in the U.S., UK, Ireland, South Africa, Canada, Australia, and New Zealand. You can find it simply by typing “Disney” into the Spotify search bar. Here’s what comes up when you do: 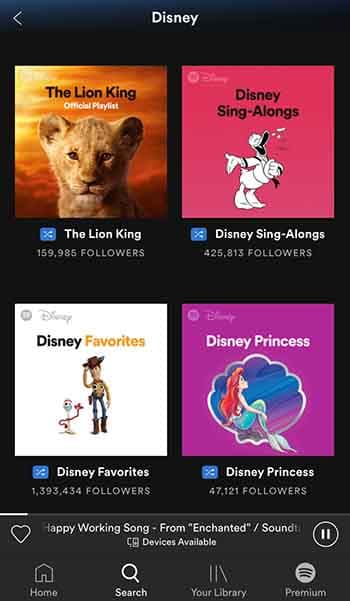 Scroll down a bit, and you’ll even find a playlist called “Disneynature Soundscapes: Oceans,” which provides some super-relaxing white noise to help you unwind. 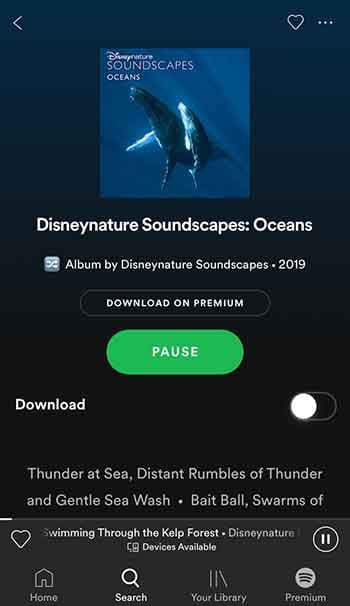 To see some other playlist examples, you can check out the Spotify press release announcing the feature here. As well as everything you can see there now, Disney promises to keep adding to the hub throughout the summer and beyond. With big some big Disney hitters like “The Lion King” and “Frozen 2” on the way, that is not to be sniffed at.

This is big news for our family as we’ve developed a bit of a Christmas tradition involving Disney songs and lots of singing along. It isn’t just drunken karaoke Disney Princess wannabes though, who’ll be happy about this move. Anybody who has ever watched a Disney movie will love it because the music is half of the magic when it comes to Disney movies, and it’s magic we’ve all grown up with.

Is Spotify Premium worth it? ►

How to see your favorite musician live with Spotify ►