Tumblr has had integrated audio blog posts for some time now. Thanks to partnerships with Spotify and Soundcloud, you can quickly embed music and podcasts into  Tumblr. There are multiple options to find audio such as search and external URLs. While Tumblr doesn’t support all of Spotify’s and Soundcloud’s features, it will be sufficient enough to share your favorite tracks with your followers.

Both audio services have advantages and disadvantages when used with Tumblr. Spotify provides only music, but has playlists and a much more detailed embedded player. Soundcloud includes podcasts along with music, but only allows single tracks. Regardless of which audio service you prefer, they are both great for enhancing your Tumblr. 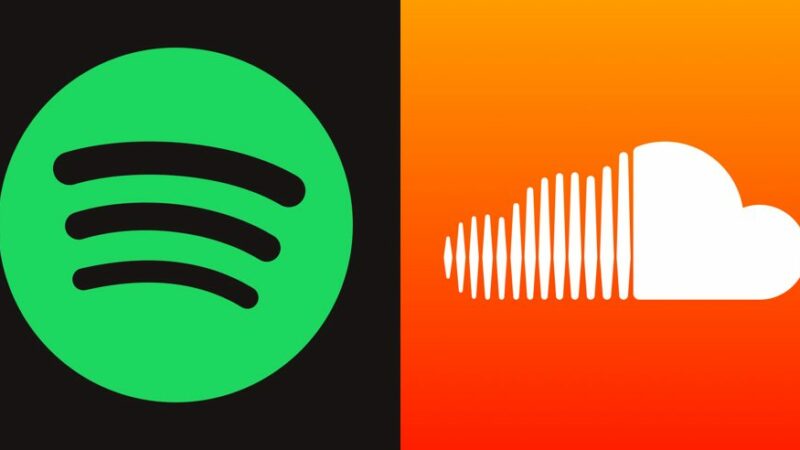 We’ll show you the best ways to get your Spotify and Soundcloud collections on to Tumblr.

Selecting an audio post will default to searching for tracks. The Tumblr search will browse through both the Spotify and the Soundcloud libraries based on your search terms. 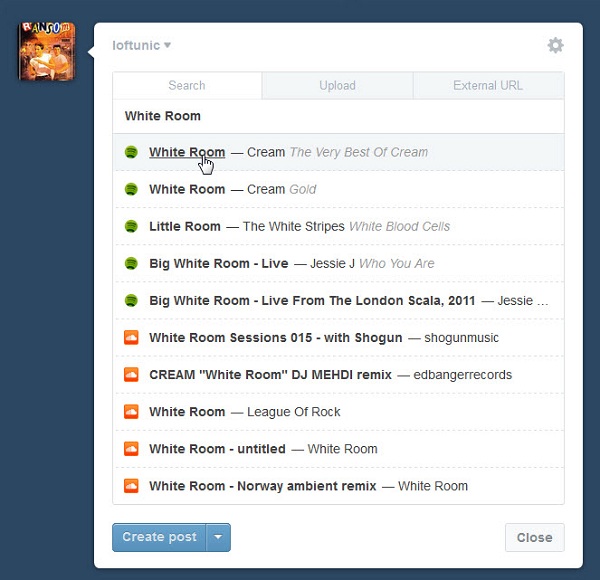 This search is very basic as you cannot specify if you are searching for title, artist, album, or user. For example searching for “White Room” by the band Cream will yield several unwanted results. Search shouldn’t be used if you are looking for a very specific track because of these limitations. Thankfully there are better options on Soundcloud and Spotify.

Soundcloud currently allows you to embed single tracks into Tumblr. At the moment track sets cannot be shared on Tumblr and will result in an error. Still, Soundcloud is a great option as it allows you to include both music and podcasts into your Tumblr. There are two options to get your Soundcloud tracks onto Tumblr: automated and copying links. 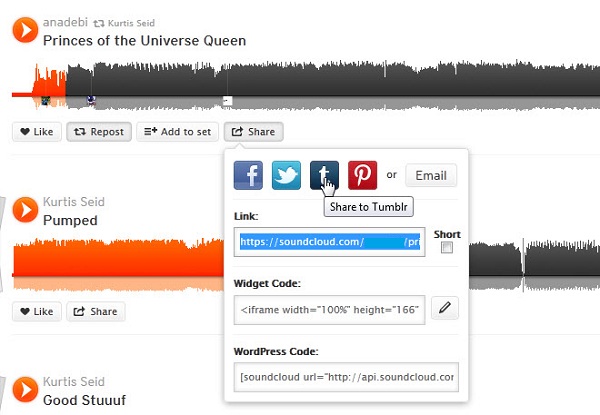 For either method find your desired track and hit the share icon. For the automated version hit share to Tumblr. 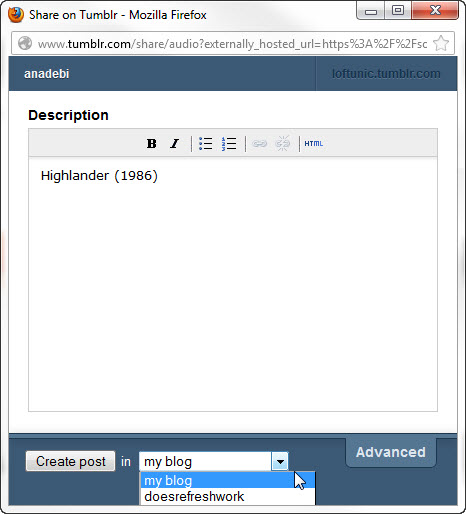 A new window will open where you can write a description and which Tumblr blog you want to post to. 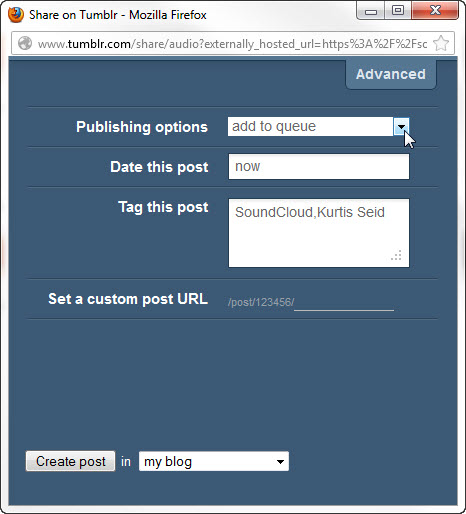 Selecting the advanced tab will allow you to post at a later date, change the URL, and add tags.

Hit create post and your Soundcloud audio will soon appear on your Tumblr. However the post will be very barebones. 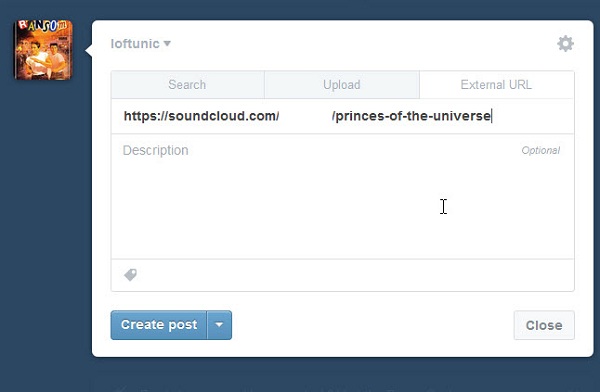 For a more detailed post copy the Soundcloud link bellow the share to Tumblr button. Switch over to Tumblr and paste the link. 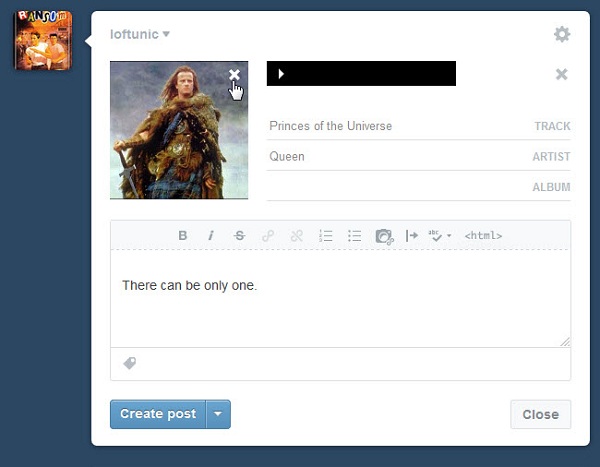 Tumblr will pull your track and load a menu to fill in new details. You can change the track name, fill in artist and album, add a description, and upload cover art.

Just hit create and your Soundcloud music will appear on your Tumblr for everyone to enjoy. 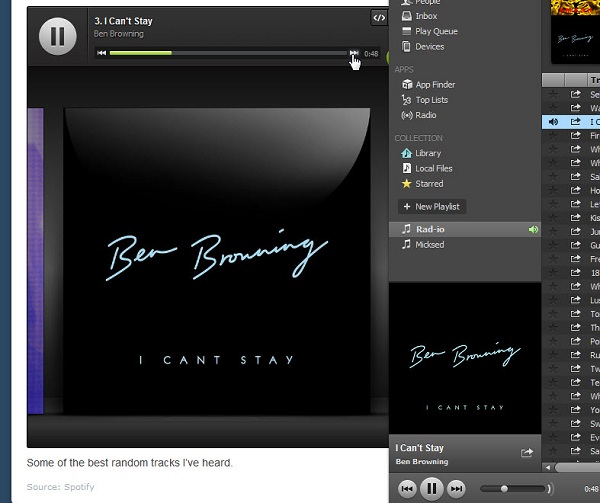 Embedding music from Spotify is much more detailed compared to Soundcloud. You can include single tracks or entire playlists with Spotify. One thing to note is that tracks don’t actually play off of Tumblr. Instead, Tumblr will open Spotify and seamlessly play. 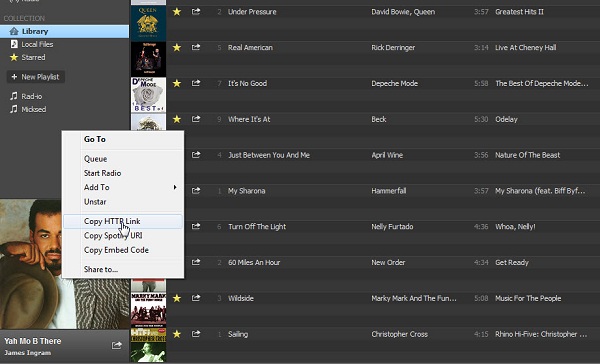 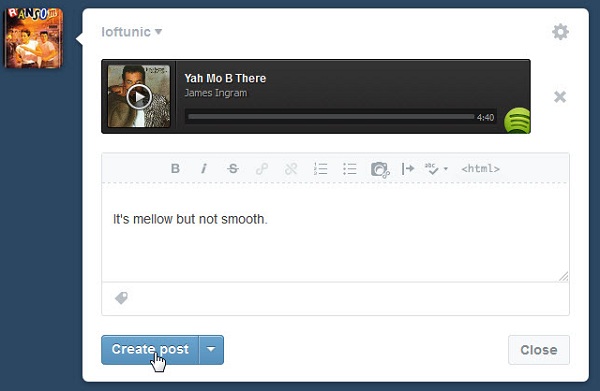 Switch over to Tumblr and use the external URL option under audio post. The desired track will pop in instantly. You may add in a description and tags if you wish. Hit create post and the single track will be on your Tumblr blog. 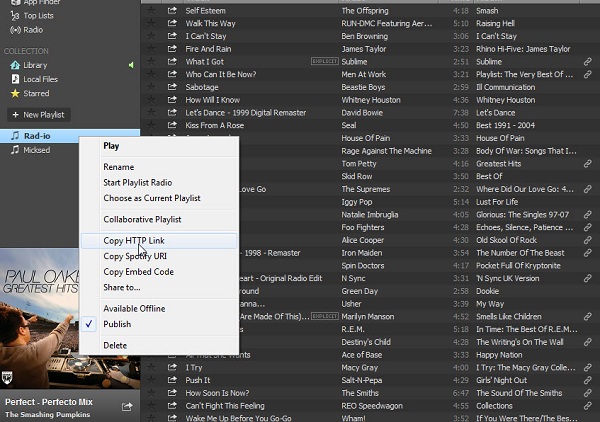 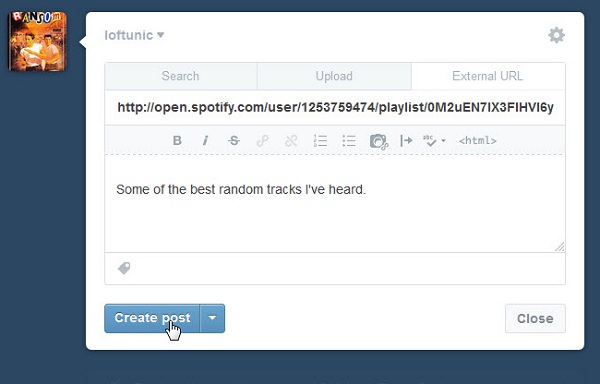 Head over to Tumblr and paste the URL into the external URL box. You can include a description and tags. Now hit create post to embed a full playlist. 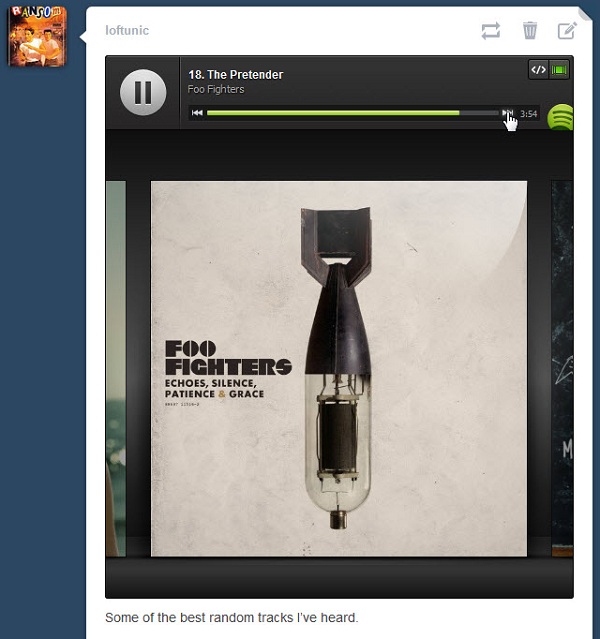 Spotify tracks and playlists in Tumblr will include buttons to skip tracks, a link to Spotify, and a large album cover. There are also two options on top right to view the link or whole playlist. 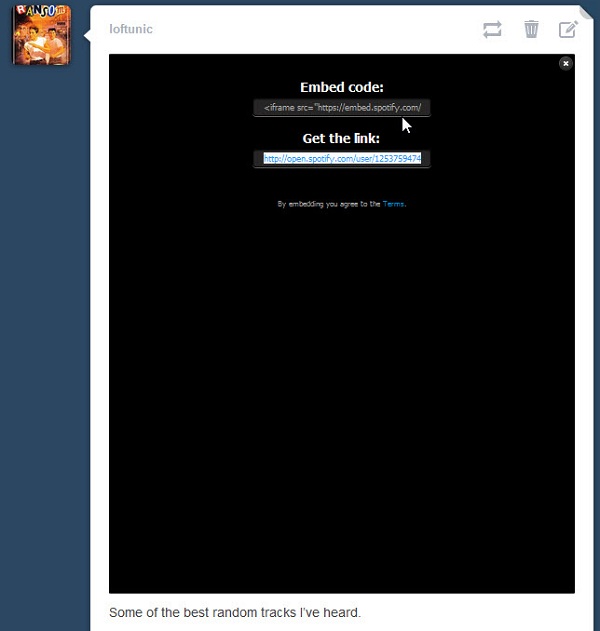 Pressing the white link icon will switch to an overlay with the embed code and direct link. 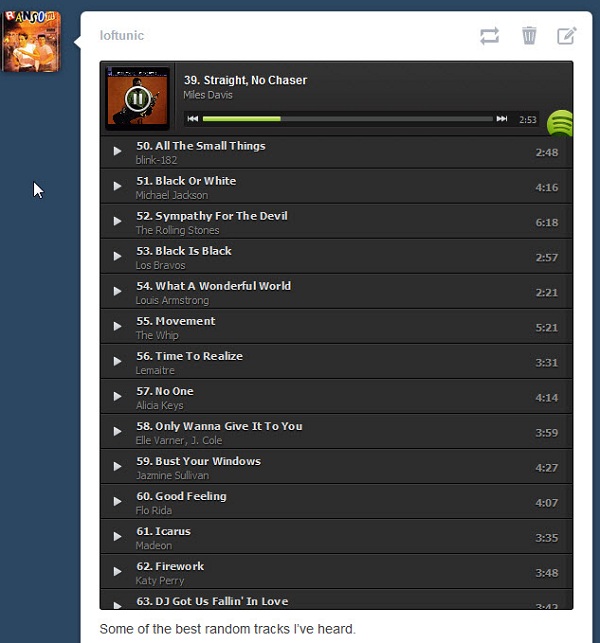 The playlist button will show your current track at the top and the remaining tracks below.

Tumblr has a diverse amount of options to include audio on your blog. Soundcloud is great for single track music and podcasts, but does not support whole sets. Spotify on the other hand embeds large playlists, but is strictly for music. No matter which service you choose, it is simply and fast to get your personal audio onto Tumblr.